In memoriam of Esko Mäkelä 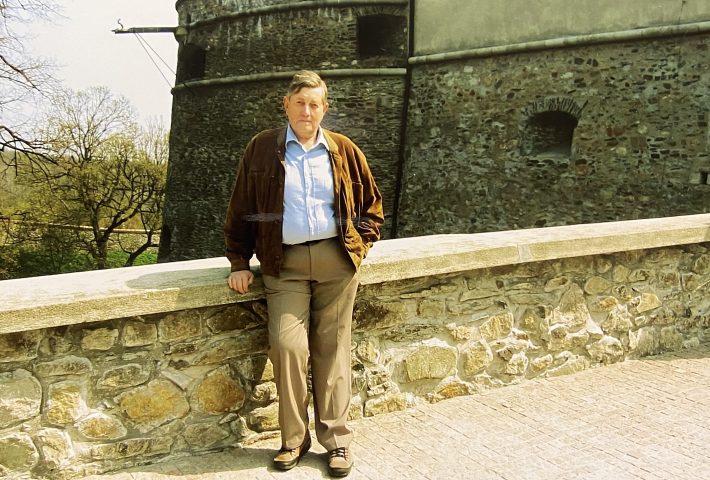 Mäkelä Alu’s head figure, entrepreneur Esko Mäkelä, passed away on 28 October 2021, just a few days before his 80th birthday. The heart of the family business, the company’s long-time CEO and chairman of the board, a brave and far-sighted entrepreneur, and an essential pillar of the local community is no longer with us.

He will be dearly missed by Mäkelä Alu’s work community and partners, the local community of Luoma-aho, and, above all, his family: his wife Aila, and their children Petri and Terhi and their families.

Esko’s story is the story of the Mäkelä family business

Esko Mäkelä was born on 3 November 1941, in the village of Luoma-aho, where the Mäkelä family business has operated since 1937. Esko Mäkelä and the company were thus contemporaries whose stories run in parallel from the 1940s to the present day. During those years, the company has grown and taken new steps. It has created jobs and improved the vitality of the local village while many other Finnish rural towns have struggled to survive.

Esko Mäkelä lived all his life next to the family business. He completed a vocational qualification in business and administration and started working for the company when he was just 20, at the same age his father Fredrik “Reeti” Mäkelä was when he founded a company that manufactured tinplate containers.

Both entrepreneurs were known for their courage to explore new opportunities. Driven by this courage, the family business expanded from the manufacture of sheet metal containers to the manufacture of roof and wall profiles. In the early 1990s, the focus was on the production of aluminium profiles. The company has operated under the name Mäkelä Alu since 1993.

Esko Mäkelä served as the company CEO for decades, and then as Chairman of the Board. As a manager, he also enjoyed practical work, and in the early days, for example, he installed roofing sheets with the rest of the staff.

Esko Mäkelä got the idea for aluminium extrusion in the 1980s, when he learnt about a company operating in the field in Norway. He bought his first extrusion line in Germany in 1989. It was an important deal, both for the Mäkelä family business and for the company selling the machine.

According to Esko Mäkelä, once the deal was concluded, the German business partners suddenly burst into applause and cheers. Later, it turned out that something else had happened at that very moment: the Berlin Wall had fallen. That moment marked the beginning of a new era in world history, but also in the history of the Mäkelä family business.

People had their doubts about the new entrant on the market, but Mäkelä took his place in the industry by following his own path and principles that still guide the family business today. Order-based production and customer-oriented service were the cornerstones of the company’s operations. The journey of Mäkelä Alu began when manufacturers of doors and windows discovered aluminium. This was the niche that Mäkelä Alu decided to explore. Germany became the key market for the company’s exports.

The opening of the first extrusion line.

When the work community thinks of Esko Mäkelä, he is described as joyful, positive, honest, people-oriented, and caring. Esko Mäkelä was not a manager who hid in the office, but a man of the people who was interested in every employee of the company. Of course, he was equally interested in the company’s affairs down to the smallest detail, even after his retirement.

“He approached people easily, and he was easy to approach. There was nothing we couldn’t talk to him about,” says one of his long-time coworkers.

He was a true people person, and he never pretended to be anything he wasn’t. That is one of the reasons why he was so respected. When Esko spoke, everyone listened.

Esko Mäkelä had a genuine interest in his hometown and home region, and he contributed to their wellbeing in many ways, for example by supporting the village school and village centre and by establishing a scholarship fund for the Alajärvi Upper Secondary School.

Esko believed that we should always move forward and keep up with developments. Instead of obsessing over quarterly results, he emphasised the importance of looking forward. For him, a quarter meant 25 years.

Today, Mäkelä Alu is the world’s northernmost aluminium extruder and a leading player in the industry in the Nordic countries and Europe. The company is the largest private employer in its hometown, and today, it is surrounded by an industrial cluster of smaller businesses that specialise in the further processing of aluminium. The village surrounding the factory is fairly unique, as there are about as many jobs as there are residents.

This industrial hub and these jobs would not exist without Esko Mäkelä. His work lives on and will continue to provide a livelihood for many businesses and families. Not from quarter to quarter, but from year to year.

An employee shares their memories of Esko

It has been a great honour to be part of your growth journey. As a little girl, I used to run away from home to go to Peltituote to work with my father. I also remember your parents, and the days of Mäkelä Metals, and how I once sat on the stairs of the dispatch centre with the girls of the village.

I also remember when Mäkelä Alu started operations. The whole village was amazed by your courage, even though everyone knew that you knew what you were doing. The industrial village of Luoma-aho and the city of Alajärvi would not be what they are without you.

I will always remember that Thursday afternoon when you called me to offer me a job. That day, a little girl’s dream came true. I didn’t hesitate for a second, and that’s the path I am still on.

I remember one funny incident when the filters were being changed in the coating shop, and of course you were curious and wanted to witness it, you got white paint dust all over you. After that, you came to my office, as you always did during your daily check-ins anyway. I remember how I told you that you can’t go to your car like that, and we started cleaning up the paint.

You have created all this around us, the whole of Mäkelänmäki, and made all this possible with your courage and unyielding spirit. I do not want to write about you in the past tense, as the story of your life’s work continues.

May you rest in peace. You have our deepest gratitude and appreciation.”

Citius, altius, fortius – grow your business with the AluServices® concept

Mäkelä Alu is taking a step towards producing solar energy

The Industrial Union in Finland has warned of possible strike action